Stories from the Cafe

Putting on a Themed Cafe: "Out of This World"

In Daytona Beach, Florida the first Science Café meeting of 2012 was titled "Finding Life Beyond Earth," a theme first featured on PBS/WGBH's NOVA program last October 19. The discussion, which drew a standing-room-only crowd of 46 people to Sweet Marlays' downtown coffee shop, was a lively dialogue skillfully led by Embry-Riddle Aeronautical University physics professor Dr. Ted von Hippel (pictured to the right), seeking an answer to the question, "Are we alone in the universe?"

The wide-ranging topic touched on astronomy (how many stars out there might have planets that support life in the so-called "Goldilocks Zone"), the building blocks of life (the periodic table is universal, life appears in some challenging environments like Antarctica and volcanoes), life elsewhere in our solar system (Mars, Europa, meteorites), and the possibility of alien visits (Roswell, SETI).  “He got me to think of issues I had not considered,” said regular attendee Carol Jacobs.  “For example, he made me realize that if life was transmitted across our solar system, it's way more likely to have gone from Mars to Earth than vice versa.”

Since it began a year ago, Daytona Beach's Science Café has been ably led by Kristin Mixell, who books the speakers, organizes the meetings, and gets the word out to everyone on her growing e-mail list.  This was the first time she coordinated one of NOVA’s themed cafes and found it to be a positive experience.  Having a ready-made topic and finding a local professor in the speaker database simplified the planning process. “It was also exciting to have promotional materials provided by NOVA,” she related.  In the future she hopes to screen related NOVA specials at the nearby Cinematique of Daytona, a non-profit theatre that is also home of the Daytona Beach International Film Festival. 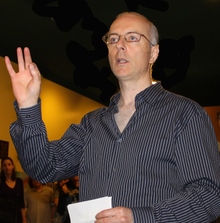 Sign up to get the latest scoop on new events, resources, and ideas for your café.